Since the turn of the century, transducer loudspeaker technology became the standard and means to reproduce audio.  From the telephone to record players, these loudspeakers became the only choice for sound reproduction.  As time progressed, loudspeakers moved into various other environments and applications that required audio.  Today, we can find the need for sound reproduction in smartphones, casino games, displays, home theaters, cinema, automobiles, airplanes, kiosks and more - nearly everywhere that involves people.

Every type of loudspeaker, no matter what elements or methods chosen, continue to move air to produce sound.  This includes piezo elements, electrostatic, electromagnetic and other methods and materials used to produce sound.  Each method continues to produce sound in a pistonic manner.  In addition, the directional nature of a piston pushing air becomes very apparent as frequency rises to the point when the wavelength in the air is comparable to the dimensions of the diaphragm.  At a certain point, all pistonic loudspeakers become very focused to the listener.  Of course, there are means to avoid this problem related to diaphragm design, but would require the component to be too small to generate acceptable sound at lower frequencies.

This explains why most loudspeakers designed for critical listening usually have two or more drive units.  One large one that can move enough air to reproduce bass sounds and a smaller driver, which, due to the smaller diameter, reduces the directional aspect in the higher end of the audio spectrum.  Still yet, the speaker's directivity changes markedly with frequency resulting in undesirable effects including the listening area having to be constrained in order to maintain good sound quality. Even though some solutions involving  multi-unit and complex arrays have been developed to solve this problem, these solutions become extremely expensive and overly large to make any sense.

Therefore, due to the technology and physical nature of conventional loudspeakers some audio applications would require a "new technology" to be developed, one that would allow sound to be heard in ways and in places previously incapable. 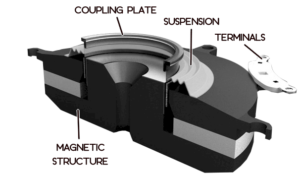 A DML (distributed-mode-loudspeaker) exciter functions by creating and reproducing a bending resonance within surface material.

When one or more exciters is placed at points on the panel, they will excite many of the panel's natural characteristics.

Surface materials being used with DML exciters exhibit different acoustic behavior from pistonic loudspeakers.  Most significantly, DML exciters do not create a conical beam as their output frequency increases, rather they retain an extremely  wide listening area - up to 160 degrees in dispersion  - all independent of frequency -no matter what their size making them extremely scalable in application.

DML technology began in the early 1990s as a research project of the United Kingdom's DERA (Defence Evaluation Research Agency), now QinetiQ. The research aimed to reduce the level of internal noise in military aircraft. As part of this research, DERA's scientists tried lining cockpits with high-stiffness sandwich materials but discovered that, rather than lowering the noise level, they increased it.  As this effect might have significance for loudspeaker design, they filed a speculative patent.  Because DERA itself had neither the resources nor the experience to develop this application the technology was quickly adapted by a number of companies to further develop the commercial aspects of the discovery.